Book of the Month: Schola Caritatis: Learning the Rhythms of God's Amazing Love

Starting a new feature for the next several months called Book of the Month.  I will present one of my books and tell you a little of the ... 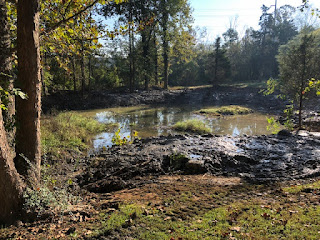 So my yard is a disaster right now.  My neighbor, Charlie, and I own a pond that lies between our two houses.  When we bought the house 17 years ago the pond had just been built, and looked wonderful.  But through the years the water level and quality diminished, and it just turned into a mucky, marshy mess that is impossible to maintain.  Anytime you try to mow or weed-eat you sink up to your knees in mud.  So after fighting a courageous battle--spanning roughly 15 years and a couple of different next door neighbors--I finally gave up.

That was until Charlie moved in next door.  I could just see it in his eyes every time he looked at it.  Only a shell of its former self, the pond had, for the most part, turned into nothing but a bog.  But when he looked at it, he saw something different altogether.  Because he saw it, not for its problems, but for its possibilities, which I had lost sight of long ago.  All I carried around was a distant memory of what it once looked like, and an unwillingness to go to the expense, or the trouble, of trying to make it beautiful again.

So a week or so ago Charlie came over as I was mowing my front yard and told me about his vision for the "pond."  He was so excited as he tried to give me a little glimpse of the beautiful picture that lived inside his head and heart.  And, to be honest, I was reluctant.  Captured by his energy and enthusiasm, but reluctant nonetheless.  I think I had just settled.  Sadly content to allow that part of our property to always be less than what it could be; mostly because I didn't want to go through the fuss and the muss that it would take to make it something better.

Well, long story short, two days ago the project began.  And as it has unfolded, I have been totally overwhelmed by the mess it has made.  I do not know what I thought it would look like to undertake a project of this magnitude, but I certainly didn't expect this.  I mean, my yard, which I have always prided myself in maintaining, is a disaster area--not to mention the three beautiful azalea bushes that were some of the early victims of the carnage.

All I can see is the mud.  Everywhere!  But when Charlie comes down, and takes it all in, it is always with a smile on his face, because he doesn't just see the mud, he sees the potential.  He sees the possibilities.  He doesn't just see what it is right now, he lives with a vision in his mind about what it will someday become.  And I really love (and long for) that.

There are several areas of life for me right now that are very similar--firmly in process.  They are muddy and messy and unfinished  And it is really easy in those areas to only see the mud and not to see the beauty of what someday will be.  I think I need to learn a lesson from my neighbor, Charlie, and not get so overwhelmed by the way things look right now, but to be guided by a bigger, more beautiful vision.  A vision that is able to see past the mud and the mess and the madness, to the magnificence of the dream that God is dreaming for me.
Posted by Jim Branch at 7:20 AM

Jim Branch
Director of Core Leadership: a ministry based in Powell, TN that has as its mission to nurture and encourage the life of God within the hearts and souls of His people, particularly those in some type of leadership role.